Most frequent illnesses in domestic Rabbits

Rabbit breeding is still troubled by illness. Despite advances in science and research, despite the availability of information, improvements in feed produced and breeders’ practices, there are more and more health problems for breeders. The medical condition of rabbits is a factor limiting the prosperity and continued existence of a breeding colony.

For every illness there is a huge quantity of information available in literature and on the internet, but here we want to state the most important facts and, in particular, practical experience:

Origin and transmission: a very variable virus, transmission in particular by mosquito or other blood-sucking insects;

Occurrence: it affects rabbits of every age, at the earliest from the second month, linked to the occurrence of insects in the warmer months;

Symptoms and course: slow onset and very variable course – swelling of the eyelids, skin on the ears or in the genital area, progressively swelling of the head and whole body, sleepiness, lack of appetite, worsened breathing, discharge from the nose and possibly pneumonia – death within 14 days, sometimes only pneumonia without problems on the body surface. The virus interferes with immunity and previously hidden bacteria may come to light (Pasteurella). Losses can be very variable, for unvaccinated rabbits up to 100%.

Sometime the disease is not that serious – local inflammations on the skin on the head and ears in the place they were bitten by a mosquito, then spontaneous recovery with scars – sometimes for vaccinated rabbits with weaker immunity;

Treatment: untreatable, possible attempt with antibiotics in early stages if symptoms are mild;

Prevention: vaccination from 4 weeks of age, annual repetition, at times when there are lots of mosquitos it is a good idea to repeat vaccination after 4 months. After vaccination there could be a local reaction in the place of application.

Origin and transmission: A virus, transmission in particular on dust, i.e. all conceivable ways, including on the 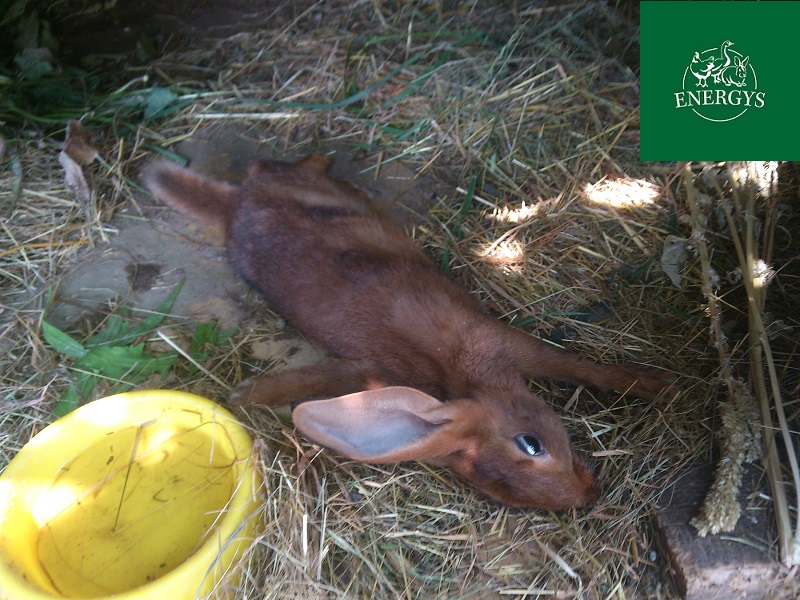 Occurrence: it affects, in particular, unvaccinated young rabbits up to 3 months of age;

Symptoms and course: very fast, most frequently sudden death without previous symptoms, sometimes foam or blood in the nose, changes to the lungs, liver and other internal organs;

Treatment: untreatable, very high losses for young rabbits up to 100%;

Prevention: vaccination from 6 weeks of age, the optimum is in the 10th week – then immunity lasts for a year.

Origin and transmission: virus – mutation of the previous version, infection through all routes;

Symptoms and course: young can be affected in the nest with the mother (not yet one month old), young breeding rabbits are often affected in their first year if vaccinated only against RHD 1 – losses can reach almost 100%.

Treatment: untreatable, occasionally, however, the illness is chronic and weaker and the rabbit survives;

Prevention: vaccination from 4 weeks of age, under ordinary circumstances it has to be repeated after six months. The Biovety vaccine is available in the Czech Republic.

Note: Ordinary vaccines against RHD 1 practically do not provide protection against RHD 2.

Origin and transmission: a parasitic protozoan in the brain or kidneys (and other internal organs), transmission by 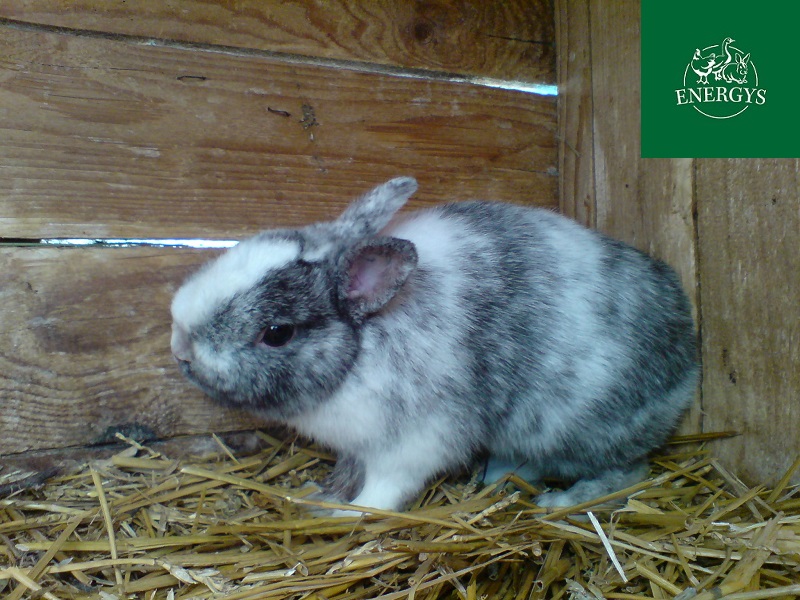 urine from the mother to offspring or in an infected hutch;

Symptoms and course: slow onset – turning of the head if the brain is affected, gradual turning of the whole body, in the case of older females, thirstiness and greater urine production;

Treatment: long application of an anti-parasitic (Fenbendazole for four weeks);

Prevention: limitation of contact with an affected rabbit or contaminated environment;

Origin and transmission: Coccidia – several types in the stomach and a specific one in the liver, transmission by contaminated feed or bedding, transmission from the mother to the young;

Incubation period: variable, usually 7–10 days, influenced by the quality or composition of the feed dose (lack of fibre, excess of starch and protein)

Occurrence: it affects young rabbits from the second month of age, after weaning, in the case of weaned rabbits occasionally, young rabbits taking mother’s milk are resistant;

Treatment: treatable at the start – sulphonamides (the medicines are available on prescription), supplements and antibiotics are suitable;

Origin and transmission: bacteria living in the mucous membrane of male and female sex organs, transmission during mating, a mother may infect her young;

Symptoms and course: swelling, reddening of the mucous membrane of the external sex organs, later scabs, possible extension to the area of the nose and labia, long course without limiting the life of a rabbit or reproduction; 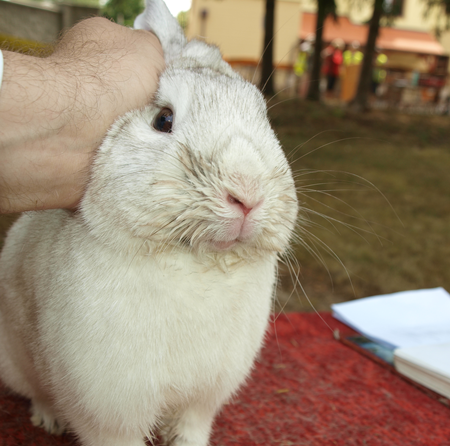 by the conditions in the breeding facility (damp, dust, draughts) and stress on the rabbit;

Occurrence: in rabbits of every age, the most resilient are young fed with their mother’s milk, frequently affects rabbits raised in a closed space;

Symptoms and course: watery to festering discharge from the nose - cold, in the case of widespread and neglected infection pneumonia with festering centres anywhere in the subcutis or organs;

Treatment: problematic, treatable at the start – antibiotics (the medicines are available on prescription), but hard to treat permanently, limited local treatment of a rabbit’s nose;

Origin and transmission: fungus (Trichophyton) on the skin’s surface, transmission by immediate contact, in an infectious environment, young may be infected by their mother;

Occurrence: in particular in rabbits reared in a closed space, in the case of increased humidity, it occurs after weaning;

Symptoms and course: rounded patches first on the head and ears, red and free of fur, gradually expanding over the body’s surface;

Treatment: complicated and expensive (antimycotics), most suitable to remove a rabbit early;

Origin and transmission: itch mites (Sarcoptes) living in the skin of a rabbit’s outer ear canal, transmission by direct contact, less probable indirect transmission in a contaminated hutch, infection can be passed from the mother to her offspring;

Symptoms and course: brown scabs in the outer ear canal, progressively spreading to the lower part of the inside of the external ear, occasionally also spreading to other parts of the head. The lesions usually do not itch,, so nothing is visible without a detailed examination of the ears. If the illness is neglected, the inner ear can become infected and there could be serious damage to a rabbit’s overall medical condition.

Treatment: very simple, general injection application of ivermectin, should be repeated in 14 days, local treatment with oil is also possible;

Prevention: regular checks on the ears, in particular for breeding rabbits.

Origin and transmission: mites (Cheyletia) on the surface of the skin and in the fur, transmission in particular 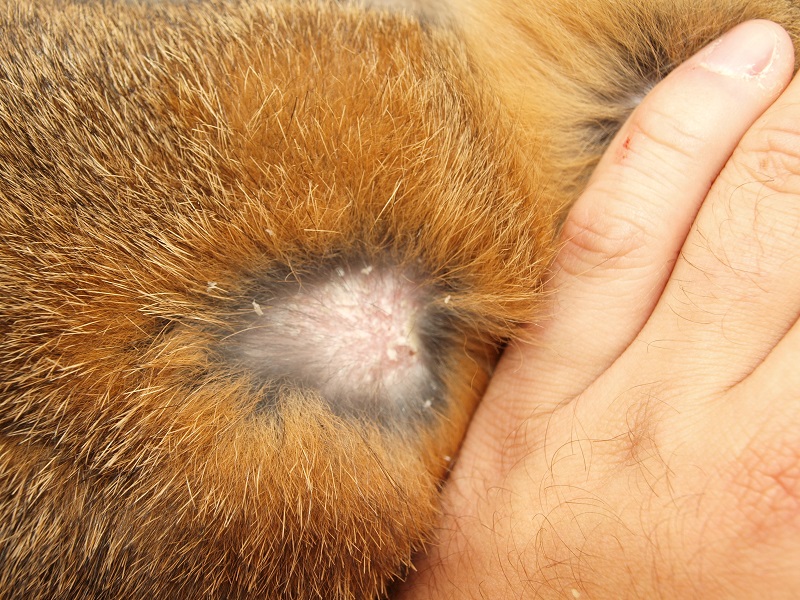 Symptoms and course: loose fur in the nape of the neck and on the back with a large quantity of “dandruff”, does not itch;

Treatment: general repeated injection application of ivermectin, local treatment with an anti-parasitic is often not successful;

Prevention: check on the surface of the body, in particular the fur on the back of adult rabbits, preventative treatment with ivermectin.

How Do I Know That a Rabbit is Sick?

Health status is a fundamental indicator that primarily affects other (reproductive, production, exhibition, sports) indicators in rabbits. The primary endeavor of each breeder should always be to maintain good health, be it breeding for meat production or just breeding - for exhibition and competition purposes. All rabbit care in the short and long term should aim for this.

The Most Common Diseases of Rabbits and Their Prevention

Although there may be only a few diseases affecting rabbits (compared to dogs and cats), it goes without saying that the aim is to maintain good health. Infectious diseases are those caused by germs (viruses, bacteria, parasites, fungi) and spread among animals.