Due to the growing human population and the shortage of sources of protein, goats, as undemanding but highly productive animals, will become increasingly important to man, who they have served for thousands of years. What to feed goats and how to take care of them?

What should you feed your goat?

In general goats require higher quality feed than sheep! Bulky feed should form the basis of their daily feed ration (hay, green fodder, silage, hayage, straw), supplemented by grain (crushed grain, oats, barley, wheat or corn) and vitamin-mineral licks. Grain feed is rationed carefully, to prevent metabolic disorders. Grain is usually provided during the breeding season, to animals in the second half of pregnancy and also to lactating goats.

Kids can be fed a feed mixture, which is initially added to their milk and then combined with hay.

Anglo-Nubian goats are more demanding feed. This is because they are highly-productive animals, which require the corresponding rations of high-quality feed on a commercial basis in return for their high productivity.

How to take care of goats

Goats are only put out to pasture during the growing

season, they are stabled during the winter season. Compared to sheep, goats are choosy about the grasses and herbs they eat and also enjoy grazing on trees. If the animals do not have free access to stables when in pasture, they should have simple shelters available to protect them from the weather. Before putting them out to pasture, goats should have their hooves treated and be dosed with anti-parasitic medication. The udders of dairy herds must be checked for ticks.

In a herd situation the doe and her kids are moved to the birthing box immediately after giving birth. And they remain there for one to three days. They are then returned to the herd enclosure, which includes so-called nurseries, which is what enclosures for the kids are called, and which have an infralamp during the winter season. The kids remain with their mothers for three and a half months.

Maximum hygiene must be maintained when milking and making products from goat milk. Milk intended for processing is gently pasteurized and traditional procedures are used to make cheeses, yogurts and kefir or the milk is drunk fresh.

About a third of the goats kept in this country are raised in smallholdings (up to five animals). The produced milk is intended for the owner’s use. The kids are raised in the traditional manner, with their mothers, with whom they remain for at least six weeks. Individual care reduces stress and health problems in the animals. Small family farms have a very similar situation, when family members provide the animals with above-standard care.

Demand for goat milk products motivates farmers to establish larger herds of at least 50 to 100 animals. Births are planed to take place over six to eight weeks in order to extend milk production. The does are divided into smaller groups in separate enclosures before birth, where the kids remain throughout the colostrum production period. Pressure for more intensive milk production reduces the weaning period for kids, which are transferred to group pens. The used rearing facilities also include new buildings and a smaller amount of manual work is required thanks to installation of technological elements.

At farms with intensive goat milk production (from 100 to 200 animals) the goal is to start milking as soon as possible after birth and maintain lactation for as long as possible. In order to minimize occurrence of coccidiosis among the kids a number of these farms feed medicated feed mixtures.  This concerns farms operating under a semi-factory regime, where the goat’s milk is finalized and where hired employees take care of the animals. The kids are weaned from their mothers on the second day after birth and placed into pens, where they are hand fed mixed colostrum. However, the physiological effect of the colostrum is reduced when the kids are weaned very early, not just because it is fed in a mixed ration but also due to inappropriate intervals between feeds and the low rations of colostrum. This means that the kids are more likely to fall ill.

Large-scale farms with 400 to 800 milk goats operate on a factory basis. With regard to the targeted production of milk, the kids are separated from their mothers immediately after birth and placed into pens with a feeding machine, from which they can drink warm milk as necessary at any time over twenty-four hours. Special milk feed mixtures, which are very expensive, are made for this purpose. The sale of kid meat implemented in this country means that cheaper alternatives are more popular, which may however cause medical complications in the kids.

Goats produce meat as well as milk. With regard to demand for kids for slaughter at Easter, the births are usually timed to take place in winter.

Boer goats - which are specifically intended for producing meat - started to be imported to this country in the nineteen nineties. This is a hardy, undemanding breed, with a calm temperament, which is very good at maintaining the landscape. The Boer goat remains a hobby breed in this country, because the goat meat market is not yet large enough. Despite the fact that the meat from slaughtered kids is tender, juicy, with a firm consistency, and without any distinctive aroma. Nor is there any unpleasant aftertaste to the intramuscular fat.

BREEDS OF GOAT KEPT IN THE CZECH REPUBLIC

Dairy breeds (White and Brown short-haired, Anglo-Nubian, Alpine and Saanen), meat breeds (Boer), combined breeds (Valais), fibre-producing breeds (Cashmere, Angora) and dwarf breeds (Dwarf Dutch) are all kept in the Czech Republic due to their range of use. 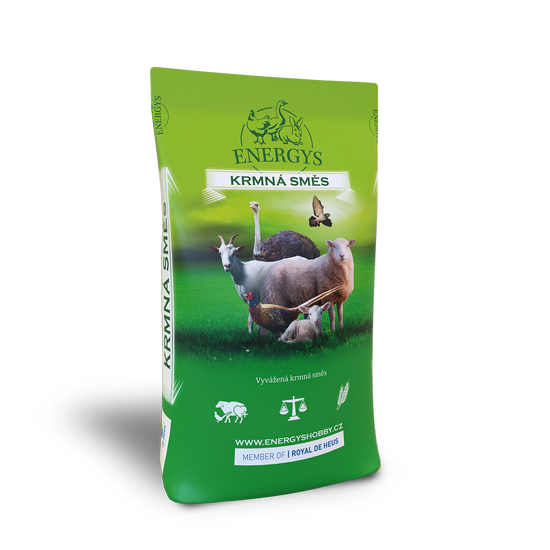 A starter for lambs and kids suitable from the first week to the 3rd week of age. First it is added to milk, later it is combined with hay. It supports the growth of a paunch, the growth of bones and muscle.

A supplementary feed mix for weaning and fattening sheep and goats. It can also be used for lamas. The feed is treacled and also suitable for gestating and milking animals. The substances contained in it support their excellent state of health a required breeding results.