Commercial pig breeders use both breeds that excel thanks to their reproduction parameters and breeds that pass on to their offspring good growth abilities, resilience and good meat quality. As a part of the hybridisation programme, the Pig Breeders Association and breeders work with dam breeds (Czech Improved White and Czech Landrace) and sire breeds.

The Improved White breed is the foundation stone for practically all world improvement and hybridisation programmes. In the Czech Republic, it accounts for the most numerous thoroughbred population that is used as a dam when crossing with the Landrace breed for the creation of sows in the F1 generation that are the mothers of meat pigs. 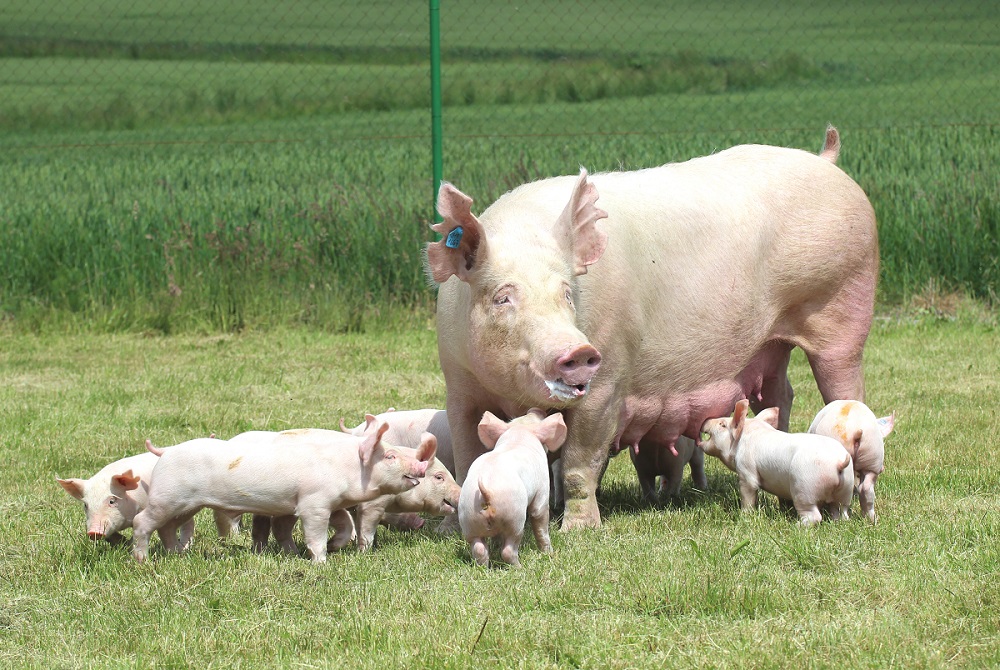 Improved White pigs have been bred in the Czech lands since 1926, when official checks on utility and hereditariness were introduced. Herd stabilisation was boosted by imports of, in particular, German improved pigs and Large White pigs from England. At the start, the breed was about reproductive utility and the exterior. The introduction of tests of actual utility lead to improvements in the composition of the meat torso with optimum representation of the meat parts and a reduction in the share of fat. When, as a part of the hybridisation programme applied in the 1980s, differential breeding started to be used, the Improved White pig was classified as a dam breed. The achievement of excellent reproductive abilities with a high number of viable and balanced piglets in litters was logically a primary requirement of breeding in the dam line. In addition, attention was paid to rapid growth and excellent conversion of feed with average muscle mass and meat utility. 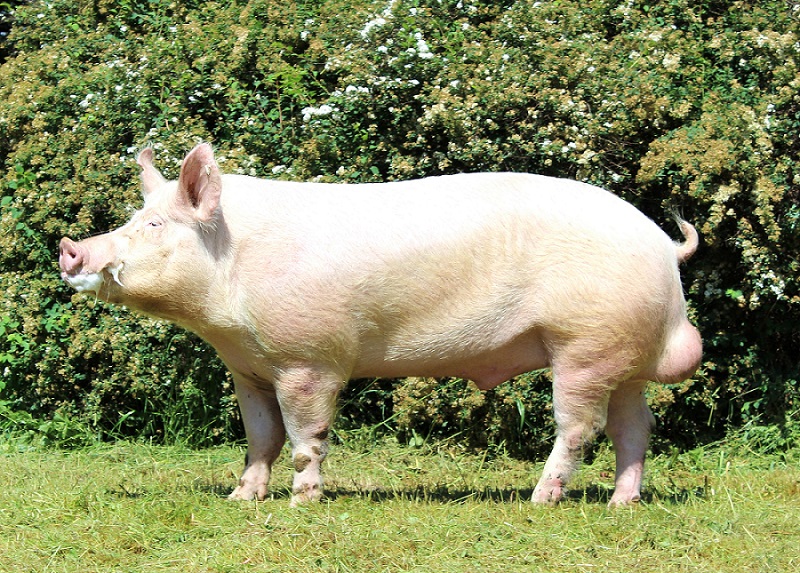 After 1989, there were a number of imports of Large White pigs in particular from England, Denmark, Sweden and France. Managing the breeding of pigs, including maintaining a breeding ledger, was the task of the Pig Breeders Association, which helped modernise the improvement programme. As a part of a programme that was launched on 1 January 1999, new improvement strategies were executed for the Improved White breed. They included integrating fertility into an estimate of breed value, the creation of super-fertile lines and a new approach to assessing the exterior.

The aim of creating a super-fertile line was to accelerate the increase in fertility for the Improved White breed. In the selected population with the highest breeding value for fertility, the utility check was expanded to include other characteristics, such as individual birth weight, genotype in estrogen locus, the points value of sows’ dam characteristics and the length of labour in hours.

When selecting animals for breeding, preference was given to individuals with a large body frame, i.e. a sufficient withers height and appropriate length of the middle body. Another criterion was the mammary gland and the number of teats. In the case of a super-fertile line, the minimum number of teats on both sides is set at 8/8, which must be visible in both sexes. Great attention was paid also to the sexual expression of both sexes and, last but not least, the shaping and functionality of limbs, which are a predisposition factor for long life. With regard to the new direction in improvement, the Improved White breed started to be called Czech Improved White (CIW). Animals in the aforementioned breed stand out thanks to their large body frame, lighter head with straight ears, more delicate, but solid skeleton and solid constitution with a high degree of resistance to stress. Their skin and bristles are white. The dam lines excel thanks to their reproductive properties, excellent growth ability with very good nutrient conversion, optimum meat utility and good meat quality.

Landrace is the second most widespread breed globally. It is a dam breed and this governs its improvement. Today, 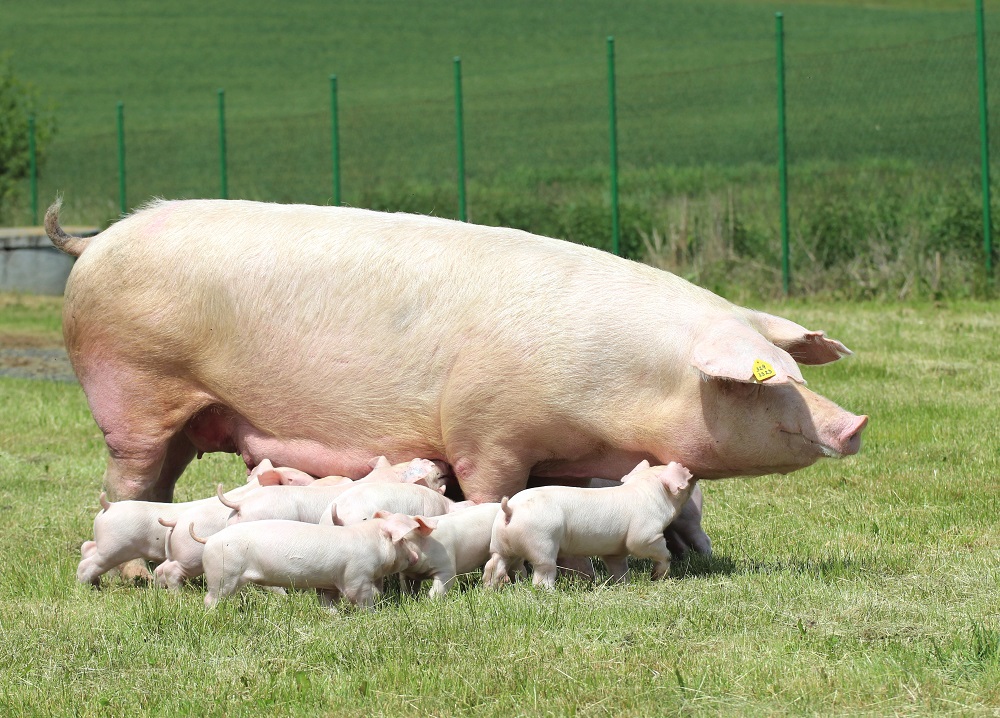 the main selection criteria is the number of surviving piglets, or rather the number of meat pigs sold. Practically all global improvement programmes deal with the balanced nature of a litter, piglet vitality and mother’s milk production. In addition to reproduction, a Landrace is require to have a large body frame with an appropriate length of the middle body. Good growth ability is a matter of course.

The basis of breeding Czech Landrace (CL) were thoroughbred pigs imported at the start of the 1960s from Poland, Canada, Germany, Sweden and later, in particular, Denmark and Norway. From the 1960s, the breed started to be successfully used for the creation of sows – crossbreeds in the F1 generation (with the Improved White breed) for production herds. As a part of the hybridisation programme, they are currently used as one of two basic dam breeds, which are required to have excellent reproductive properties with higher numbers of live-born piglets in litters and high growth intesity.

When there were quality defects with the meat (pale, soft, exudative meat – PSE) in the 1960s at slaughterhouses, it would found that this was a consequence of using stress-positive individuals (recessive homozygote in the halothane locus) in the breed. The halothane test was used to eliminate individuals with a tendency towards stress; it was successful and contributed to an improvement in the situation.

Pigs in the Czech Landrace breed have a larger body frame, a finer, but solid skeleton and a light head. Their ears droop and are reasonably long. They may have a more delicate constitution, but a solid and high degree of resistance to stress. Their skin and bristles are white. They have very good reproductive properties and high growth intensity with very good conversion of nutrients and meat utility.

Man has kept pigs for many centuries. According to some sources, pigs began to be reared, mainly for meat, in the ninth century before Christ, when they were domesticated. Pigs were initially allowed to range free but were gradually placed in sties. How are pigs kept nowadays?