Spring is the time to start fattening chickens on a small scale. Specially bred hybrid meat breeds, which genetic traits for rapid growth and a high proportion of muscle are best for producing meat. Such breeds are collectively called broiler chickens or broilers.

When you bring the chicks home 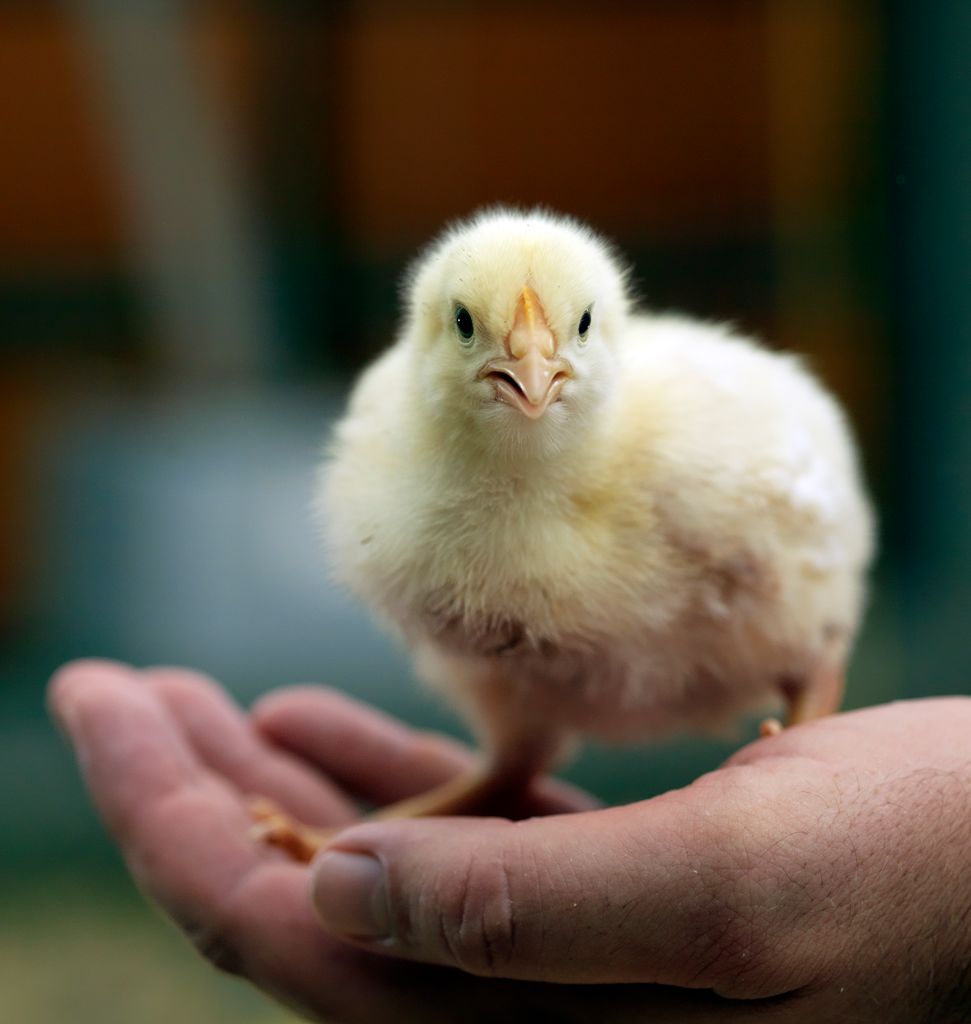 Very young chicks do best if you provide them with additional heat and light in their pen, naturally depending on the season. On their first day of life it is ideal for the chicks to have 24 hours of light, this should be reduced to 23 hours on the second day and broilers should have 18 hours of light a day from the time they are 7days old.

During their first week of life, the chickens are exposed to many stress factors such as transport or eating solid food. This also causes changes to the pH in their digestive systems, which may cause poor health under the influence of an increased amount of E. coli bacteria. This is why it is a good idea to acidify the water offered to the chickens to a pH of 4 at least during the first week of their lives. You can do this by adding commercially produced acidifiers or 8% vinegar, which is diluted at a ratio of 0.1%. Always make sure that the chickens have a sufficient supply of water.

Nutrition is decisive during the first week of a broiler chicken’s life. Similarly to other animals, it is also true for chickens that mistakes made feeding them when they are young are difficult to rectify when they are older. This means that it will take longer for the chicken to grow to the required weight and it will also be more expensive. A chicken’s metabolism is faster and its relative growth is greater during the first days of its life, which is why it also has high nutritional requirements.

Starter for broilers in the form of a crushed complete feed mixture is normally used to feed broilers during their first 2 weeks of age. This means that the animals need nothing else except water.  The amount of protein the feed contains is important for muscle growth. However, amino-acids, particularly methionine and lysine, which are added to feed mixtures and are a building block for proteins, are as important.

The middle phase of the fattening process

From the beginning of their 3rd week of broiler chickens are fed so-called grower, which is ideally provided in pellet form. This prevents unnecessary loss of feed. The relative rate of growth of broiler chickens during this period is a little lower, so the feed no longer has to be as concentrated and the protein content is less dense, by approx. 1% compared to a starter. The content of amino-acids and also anti-coccidiosis agent to prevent death is also important.

The grower is fed to the chickens until 5 days before they are slaughtered. However, if you are fattening chickens at home to greater weight, simply keep feeding growers until they reach 40 to 45 days of age. 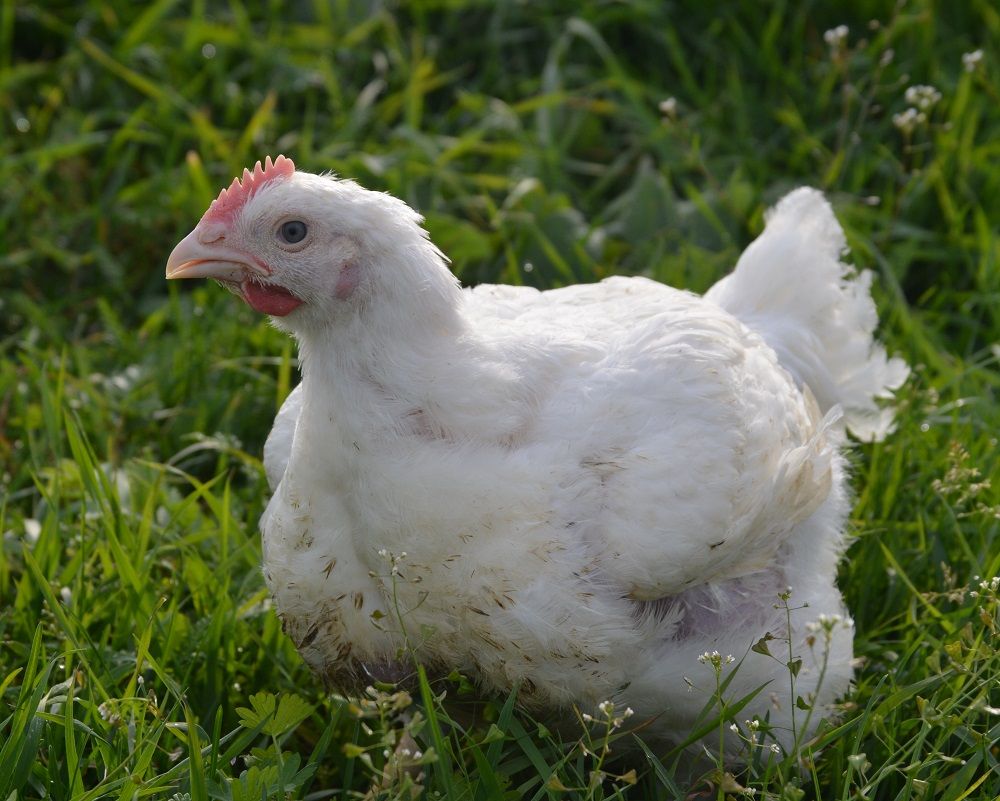 The final phase of fattening

The chickens are then fed finisher, which is a pelleted feed used to feed the chickens during the last phase of fattening. This means the chickens are fed this feed until they are slaughtered, or for at least 5 days before they are slaughtered. Relative growth is even slower during this period and the protein content of the feed is again approx. 1% lower. Finisher does not contain anti-coccidiosis agents. During this period you can save a little on feed and you can mix the finisher with crushed corn for instance.

The recommendations above only apply to the use of complete feed mixtures, i.e. feed that contains all the required substances and the animals only need fresh water in addition to this feed. However, some people also have access to their own or cheap grain, mostly wheat or corn.

In this case, the grain is mixed with a loose protein concentrate for the purpose of fattening. This concentrate is usually based on soy, which is the most frequently used source of protein. Mix the concentrate with grain according to the manufacturer’s instructions, if possible crushed grain, at various ratios depending on the phase of the fattening process.

However, count on losses of feed due to scratching, etc. as a result of the loose structure. A higher death rate is also possible due to the lack of anti-coccidiosis agents and the increased amount of molds and mycotoxins in the grain. The amount of molds in complete feeds is minimal because they are heat processed.

The flavor of chicken meat

Broiler chickens start to lay down fat in their meat from the time they are 40 days old. Fat is a known “bearer of flavor” and the meat is also becoming more mature. So the longer you fatten your chickens, the more fat their meat will contain and the more flavourful their meat will be. The color of the skin changes to yellow as a result of the fat content.

So, in conclusion, remember that the first phase of the fattening process is the most important for the overall result. It is not just the protein content that determines the concentration or strength of the feed, but also the content of amino-acids (e.g. methionine and lysine). Stop feeding feed containing an anti-coccidiosis agent at least 5 days before slaughter. Never feed broiler feed to turkeys and always provide a sufficient supply of fresh drinking water.

A ground feed mix with Coccidosistats, for the intensive feeding of broiler chickens up to 14 days of age and a support to fast growth a an excellent state of health in your broliers-

Feed for the final phase of fattening broilers. Supports a high meat content and a delicate meat taste. Start using it 5 or more days before slaughter. Does not contain coccidiostatics.

A granulated feed mix for the intensive fattening of broilers from 15 days of age to a minimum of 5 days before ending feeding up. The Coccidiostat included lowers mortality during fattening. For the next phase of fattening Broiler MAXI is a suitable mix.